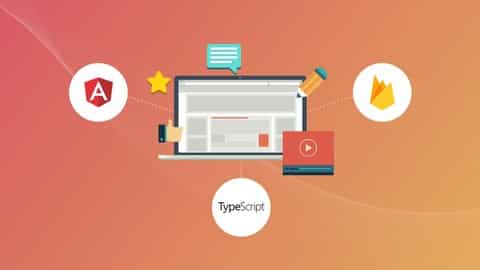 Angular is one of the most popular front-end frameworks for building single-page applications or web apps with HTML, CSS, and TypeScript. So basically, if you want to become a successful front-end or a full-stack developer, that get hired, you need to have Angular as a skill under your belt.

Learning Angular 2 or Angular 4/5/6/7/8 or Angular 9 or simply Angular(as the Angular team likes to call it) on your own can be confusing or frustrating at times. It might require you to browse through several tutorials, articles, YouTube videos, etc and get a grip on it.

If you want to get rid of going through all that trouble and just focus on learning Angular, this is THE course for you. In this course, I’ll take you through an exciting journey of learning Angular concepts through fun and easy to understand coding examples.

As the course progresses, you’ll get familiar with:

By the end of this course, you’ll be able to:

We’ll always start with the basics and go from there. Right from the beginning of the second module, you’ll jump in and build your first Angular app within minutes.

Angular 2 and all the later versions of Angular has been written in TypeScript. So, before getting started with Angular in section 2, you’ll learn the fundamentals of TypeScript and object-oriented programming in section 1 to better understand and appreciate this powerful framework.

Over the next 15 hours, you’ll learn the essentials of building Single Page Applications(SPAs) with Angular:

So, if you’re a busy developer with limited time and want to quickly learn how to build SPAs with Angular, you’re at the right place.

All these topics are covered by over 15 hours of high-quality content. Taking this course is equivalent to going through hundreds of articles, tutorials, and videos on the web! Just that the content is laid out to cover all that you’ll get to know during all that time! Once you go through the course(or just the preview videos), you’ll know that the topics are explained in a  clear and concise manner which is going to save you a lot of your precious time! This course is also packed with techniques and tips, that you can only learn from a seasoned developer. You’ll see how we’ll create a brand new Angular project with Angular CLI and build an application from A to Z, step-by-step.

You’ll also get to know ways to build a real-time SPA with Angular, Firebase, and Bootstrap. This application exhibits patterns that you see in a lot of real-world applications:

You don’t need familiarity with TypeScript or any previous versions of Angular. You’re going to learn both TypeScript and Angular from scratch in this course.

WHAT OTHER STUDENTS WHO HAVE TAKEN THIS COURSE SAY:

“Explanation is crisp.. instructor is comfortable with the topic…examples used are good and easy to understand…various aspects of the code are explained…using MDB and material for angular both are covered for creating UI components…just only the full screen is shown at all times.. which makes things appear very small… screen highlight or zoom is not used while recording video.. rest all is great.. for learning angular” – Maneesh Parihar

“That’s a very comprehensive course on Angular that also teaches Angular Material and Firebase @Siddharth Ajmera: Thanks for this great course! As with so many other courses I would love to see some Summaries or cheatsheets as PDFs or foils and also I’d appreciate to see more schematics, graphs, and sketches.” – He

“This course was perfect for beginners like me. I learned so much from it. Thanks a lot Siddharth for such a good course. Looking forward to more courses from you. Can you please add a section that demonstrates building of an application end to end?” – ankita daur

“Siddarth explained the course in a very simple manner and with simple examples. Would love more indepth on Angular Material and Firebase from him. Great course.” – Kumar

“There is so much information provided in this course. I was looking for custom Decorators and use cases where in they could be implemented to make the code cleaner. I found perfect examples on similar topics in this training. This course is great for beginners.” – Kewal Shah

This course comes with a 30-day full money-back guarantee. Take the course, watch every lecture, follow along while coding, and if you are not happy for any reason, contact Udemy for a full refund within the first 30 days of your enrolment. All your money back, no questions asked.

Siddharth is a software engineer with around 5 years of professional experience. He is the author of this course with more than 15,000 students in 192 countries. He has done his Bachelor of Engineering in Computer Science. He has worked on several Modern Web Applications. Chatbots, and frameworks. He writes articles about Angular, and Chatbots on Medium.

What are the requirements?

What am I going to get from this course?

What is the target audience?

Jenkins, From Zero To Hero: Become a DevOps Jenkins Master