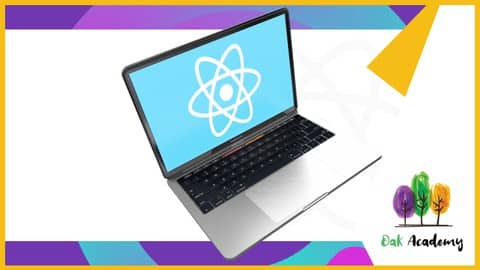 Learning React Native is a great avenue through which to gain experience developing mobile apps. Udemy features top-rated React Native courses that take you through every level of the React Native framework, so that you can start writing better apps, faster.

This react native course is for beginners. We will take you from beginner to advance level.  You will learn React development step-by-step with hands-on demonstrations. To be able to benefit from this course, all you need is a basic understanding of JavaScript.

In the react native course, we are going to tell you what dependencies you need to install and how in detail, to be able to create mobile apps on both MAC and Windows. We are going to use free tools and platforms so you don’t have to buy any tool or app. You are going to learn how to run a react native Android and iOS simulator on your MAC or Windows computer.

Later in the react native: learn react native with hands on examples. course, we are going to learn the basics of React.  JSX, ‘props system’, and ‘state system’ are going to be crystal clear for you at the end of the course.

React Native enables programmers to write true native apps in JavaScript across multiple platforms at once, eliminating the need to code for iOS and Android separately. React Native also includes features like “hot reloading,” which have made the framework a favorite among efficiency-minded developers.

In this react native course, I explained all the complex topics in very detail but by making them simpler which I believe will help you a lot. I used some diagrams to tell some important topics and created a nice looking mobile application.

Why would you want to take this course?

Our answer is simple: The quality of teaching.

OAK Academy based in London is an online education company. OAK Academy gives education in the field of IT, Software, Design, development in English, Portuguese, Spanish, Turkish and a lot of different language on Udemy platform where it has over 1000 hours of video education lessons. OAK Academy both increase its education series number by publishing new courses, and it makes students aware of all the innovations of already published courses by upgrading.

When you enroll, you will feel the OAK Academy`s seasoned developers expertise. Questions sent by students to our instructors are answered by our instructors within 48 hours at the latest.

Whether you’re interested in adding React to your existing dev skillset, or you want to develop full-stack web apps by using tools like NodeJS, Redux, and MongoDB in conjunction with React, Udemy has a comprehensive selection of courses to choose from.

React is an essential Javascript framework for web development. It is the most popular framework for developing web, mobile, and desktop app user interfaces.

No prior knowledge is needed!

It doesn’t need any prior knowledge to learn React Native

This course starts with very basics. First, you will learn some terminology. Then the show will start and you will learn everything with hands-on practice.  I’ll also teach you the best practices and shortcuts.

By the end of the course, you’ll have a firm understanding of React native and be hungry to learn more.

React is a front-end library in Javascript that was developed by Facebook. The simplest definition of React is that it is a user interface library used for building UI components for the web. But if that was all React did, it would be little more than a template library. Developers define components in React by using an HTML-like syntax called JSX. These encapsulated components manage their own state, making it simple to pass rich data to a component and keep the state of the application and its components out of the Document Object Model (DOM). These features give React components the ability to react dynamically and efficiently to changes in their state. A set of simple components in React can be composed into either simple single-page applications or large, complex web applications.

What is React used for?

React is an open-source JavaScript frontend library. Some developers consider it a frontend framework because it does more than standard libraries usually do. The most common use of React is to build dynamic user interfaces for single-page web applications. But the structure of React makes it useful for more than just creating websites. JSX, which is one feature of React, is a syntax extension for Javascript that provides a template for the HTML and manages the state of the element. But JSX can be used as an interface for things other than HTML. React Native uses React to build mobile applications. Here, JSX becomes an interface for mobile UIs instead of HTML. There are even a few libraries that use React and JSX to interact with and manage hardware like React Hardware.

How does React work?

React encourages engineers to write code using a Functional Programming approach. Engineers create components, which are normal Javascript functions. These functions return information to tell React what content should be displayed on the screen. The real power of React comes from the ability to nest or compose these functions inside of one another. This nesting ability encourages code reuse and allows an engineer to write a component a single time, but in many different places.

Is React a framework or library?

Frameworks provide an opinionated approach to building an entire application. Libraries, on the other hand, assist in building a single aspect of an application. With this in mind, React is a library. It assists engineers in presenting HTML in the browser. React has no opinions on how data is fetched, how styling is applied, or how the app is deployed or built.

Is React worth learning?

Yes, React is worth learning. There are a couple of reasons. The first one is that React is in high demand in the software development job market and has been for a few years. If you learn to code in React and can do it well, you will increase your chances of finding a job. This alone is another reason it is worth learning. Website users no longer will settle for old-fashioned sites that won’t update without a page reload. React’s method of dynamically updating the HTML of a web page fits these users’ needs and improves their experience. React has also been around a few years and has stood the test of time. A large portion of websites, both small and large, use React as a frontend framework.

Is React hard to learn?

Every technology or programming language has a learning curve, and React is no different. But it is easy to learn if you are dedicated and determined to create frontend web applications. To make learning React simpler, you should stick to the basics of React before you add any extra libraries, as that will only complicate your learning experience in the beginning. Since React is a Javascript framework, a solid grounding in Javascript will give you a head start. With this knowledge, the unique concept of JSX, React’s templating language, and the way React uses state will be much easier to grasp.

What is the difference between React Native and React JS, and which one should I learn?

React, or React JS is a front-end Javascript library for building UI components for the web. If you are interested in web development, React is the perfect library to learn to create interactive, dynamic single-page apps, or even full-scale web applications. React Native is a framework for building native mobile applications for both the Android phone and Apple’s iPhone. React Native is still React, which means the syntax and workflow for building applications are basically the same, but the generated components are different. In React, web components are generated. In React Native, the generated components interact with a phone’s native APIs. If your focus is web development, then you should learn React. If you want to build mobile applications, it is best to learn React first and become familiar with the technology before you try React Native.

Why is React so popular?

There are many reasons why React is popular. One reason is that Facebook developed it. The social proof is that if it is good enough for Facebook, one of the most popular social networks on the web, it should be good enough for other applications. React also solved many of the past issues that developers had with developing single-page applications (SPAs). React came out when SPAs were becoming popular, and all the existing frameworks to build them made development complicated and prone to bugs. One feature that makes it better than past libraries is that React is relatively easy to use. Its components are reusable, plus React’s use of the virtual DOM makes it very performant. React should remain popular in the future as each new release brings new features and performance improvements.

What is React Native?

Created by Facebook, React Native is an open-source-based mobile application framework that uses only JavaScript, making it capable of supporting both Android and iOS platforms. React, also known as React.js, saves time and effort for developers since they only need one programming language. The Native element allows developers to create JavaScript components to design software programs that run on various devices and platforms, such as smartphones, smart TVs, and laptops. With React Native, developers use the same concepts used in the original React framework to design a rich mobile user interface (UI) for various environments from existing components.

What careers use React Native?

Businesses that want to create mobile apps for iOS and Android simultaneously to ensure a seamless rollout need developers with a background in React Native. Careers in mobile app development that rely on React Native can count on professionals who can design and build stunning UIs in multiple platforms since it works hand-in-hand with platforms like Windows and tvOS. React Native developers are also vital to helping iOS, and Android companies update and otherwise modernize their apps with features like push notifications and animation for better effectiveness for mobile app subscribers. Developers with a background in React Native might work in full-stack development, designing and refining web-based games, websites, mobile apps, and more.

What is the difference between React Native and Google Flutter?

Google Flutter offers developers a UI toolkit that has some similarities to React Native. Flutter also has a native component and compiles web, mobile, and desktop applications from a single collection of source codes. Relying on existing code, Flutter is also a free and open-source framework for developers. Until this point, the two frameworks might sound similar. However, React Native is based on and only uses JavaScript, while Flutter only has a loose connection to the language. Google Flutter primarily uses a new language called Dart. Other differences between the two involve sourcing the tool itself and the installation process, setup and configuration, UI component and development, and community support.

All our videos are created/produced as high-quality video and audio to provide you the best learning experience.

See you in the course!

The Ultimate MySQL Bootcamp: Go from SQL Beginner to Expert