The Ultimate Git Course – with Applications in Unreal Engine 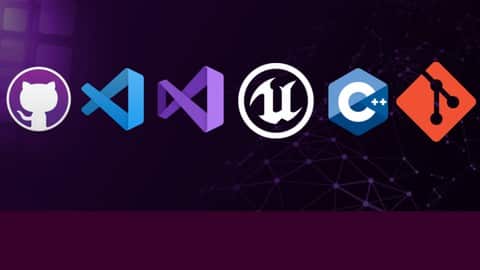 Every developer must learn version control. If you wish to get a job in the games industry or software industry, you WILL learn these skills. If you already know them, you’re MUCH more likely to get hired.

Learn the fundamental operations in the Git version control system. We will start out with the most basic operations, running Git commands from the command line. We begin version controlling basic text files to see how Git works, before moving on to real projects. We create C++ projects in Visual Studio and VS Code, before moving on to Unreal Engine C++ projects using both Unreal Engine 4 and 5!

Learn how to stage changes, commit, branch, merge, and resolve merge conflicts, rebase, cherry pick, stash, and more. Create online remote repositories hosted by GitHub, and fetch and pull from the remotes to your local machine, push from your local repository to the remote, and clone and fork operations. Learn how to submit and approve pull requests, allowing you to contribute to other developer’s online projects version controlled by Git.

Get an edge over your competitors for jobs in the industry. Enroll today!